*note this paper is being published in Diabetologia at the same time as being presented at the annual meeting of the American Diabetes Association in New Orleans, Louisiana, USA*

New research published in Diabetologia and presented at this year’s annual meeting of the American Diabetes Association in New Orleans, Louisiana, USA, shows that excessively high body mass index (BMI) in adolescents is linked to development of type 1 diabetes (the form of the condition more associated with autoimmune complications), not just the type 2 form usually associated with excess weight. The study is by Professor Gilad Twig, Sheba Medical Center, Israel and colleagues.

Type 1 diabetes has been traditionally referred to as childhood diabetes, occurring in children of any age and weight, although it can also develop in adolescence and well into adulthood. However, the rapidly increasing diabetes epidemic growing in almost all countries today consists mostly of cases of type 2 diabetes, linked to risk factors such as obesity/excess weight, low physical activity and increased sedentary behaviour.

In this nationwide study, all Israeli adolescents, ages 16–19 years, undergoing medical evaluation in preparation for mandatory military conscription between January 1996 and December 2016, were included for analysis unless they had a history of abnormal blood sugar. A total of 1.46 million adolescents were included. Data were linked with information about adult onset of type 1 diabetes in the Israeli National Diabetes Registry. Weight and height were measured at study entry, and statistical modelling used to calculate any excess risk of type 1 diabetes associated with overweight or obesity.

The authors discuss that there is growing evidence of a link between obesity and various autoimmune conditions. A possible explanation they provide is that the elevated levels of inflammatory adipokines and cytokines associated with obesity diminish self-tolerance by promoting proinflammatory processes that lead to diabetes.

They add: “Additional factors associated with obesity may contribute to the development of autoimmunity, including vitamin D deficiency, consumption of a high-fat diet, and modulation of the gut microbiota. Given that, in our cohort, there was an association between adolescent obesity and type 1 diabetes even when excluding those with pre-existing autoimmune conditions, additional factors may link obesity specifically to type 1 diabetes.”

They explain that several biological mechanisms have been suggested to explain the association between obesity and type 1 diabetes. The ‘accelerator’ hypothesis suggests that both type 1 and type 2 diabetes are caused by insulin resistance set against various genetic backgrounds that affect the rate of loss of the insulin-producing beta cells in the pancreas and thereby ultimately resulting in clinical presentation of diabetes. According to this hypothesis, the increasing demand for insulin renders the beta cells more ‘antigenic’ (prone to auto-destruction), and thus accelerates their loss through autoimmune injury.

The authors conclude: “Our findings have public health implications. The prevalence of adolescent obesity is rising worldwide at an alarming rate, with dire projections for the near future. Currently it is estimated that nearly 60% of today’s US youth (age range, 2-19 years) will develop obesity by age 35 years, most of them by adolescence, with half progressing to severe obesity. The current study projects that around 1 in 8 (12.8%) of the newly diagnosed cases of type 1 in the study can be attributed to abnormally excessive weight at adolescence. Thus, with rising levels of obesity, especially that of the severe form, we may expect that the current annual rise in type 1 cases (that ranges between +2% to +4% in most high-income countries) will be even more pronounced.”

“Our study adds to the growing evidence regarding the health hazards associated with adolescent obesity. Not only is adolescent obesity correlated with adult onset of type 2 diabetes as previously reported, but also with type 1 diabetes. Further work needs to be done to unravel this association so that we can better address the full spectrum of risks posed by the obesity epidemic or identify common environmental factors affecting both weight and type 1 diabetes.” 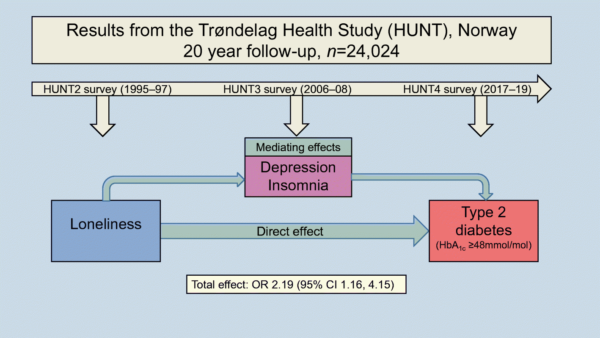